This “goodbye” themed blog post was shaping up to be difficult to write. How do I express my feelings about bidding adieu to the Hoover Dam and leaving this city that has been my home without sounding like a midwestern-gentrifying-art-collective-photographer-white-girl-dancer-chick-dumbass? After working for a while on writing a bunch of garbage – the phrase “As the pioneering female aviator Beryl Markham wrote” was actually used in that draft – I took a break to work on packing up my things.  As I was cleaning my bathroom cabinet I found a card from my tarot deck stuck under some old toiletries. It was the Three of Cups. 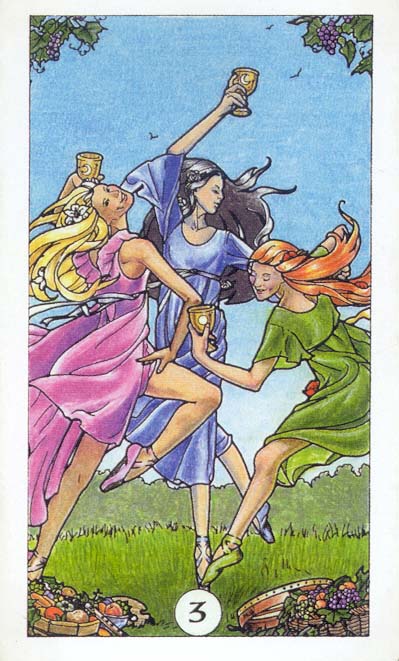 I know what you’re thinking: “The Three of Cups? I know that place – lower east side italian tavern, right? It was so good that I was worried it may not actually be gluten free and fret a lil’ that I would begin to look 8 months pregnant and start getting nausea with a headache in about 15 minutes after my first slice. But nope! It was legit!” (Taken from an actual yelp review)

Hear me out on this – sure, people take Tarot way too seriously. Old ladies can scam you out of your hard-earned Jacksons spewing crap that they think you want to hear. But one of my little idiosyncrasies is that I believe in the power of the Tarot. They’re just a set of cards that represent archetypes of human experience that are so universal that our homeboys and girls were relating to them way back in the 16th century.

The Three of Cups (in my deck) features three maidens dancing, toasting each other joyously with some boss looking chalices, their hair blowing in the wind, going all out. They are literally wearing pointe shoes. The card represents celebration, friendship, creativity, and community. This is a victory card, readers. When it comes up in your life, it means “hold on for a sec – stop getting all freaked out, don’t worry. Go to a bar with some friends, have a banquet, talk and reminisce, you are going to have a great time.” This is the Hoover Dam Card. 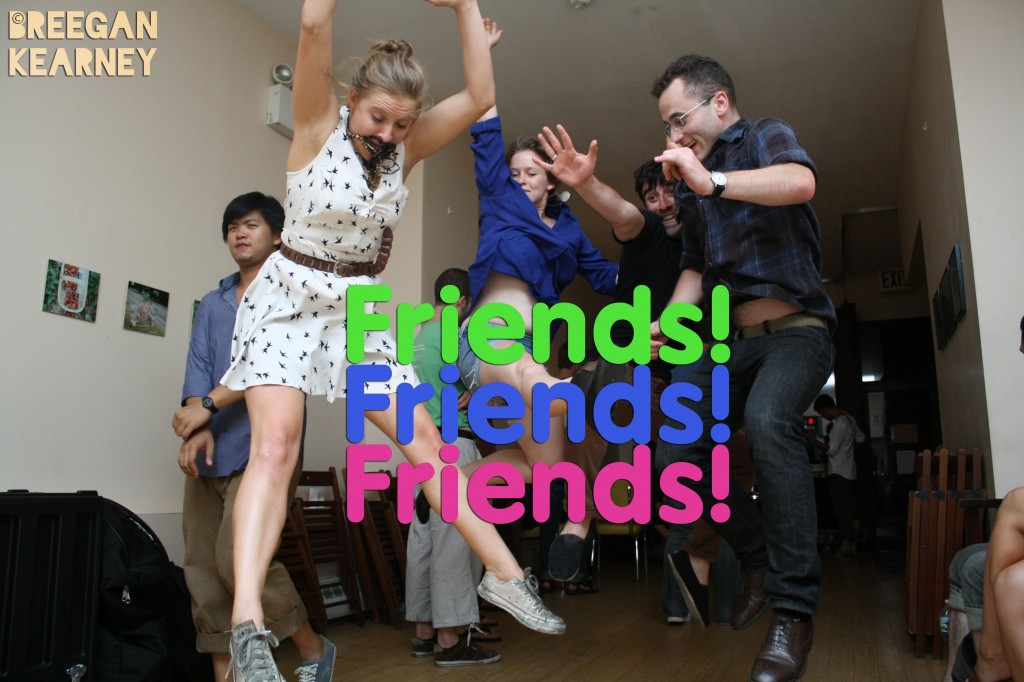 I helped found the Hoover Dam Collective 5 years ago at my alma mater, Purchase College with my roommates. Our apartment, affectionately named the Hoover Dam, always had an open door, and people came and went as they pleased. We were a late night hang out, a place for musings and music and philosophical discussions and drunken karaoke renditions of Kiss from a Rose. We have since infused that energy into all of our shows, creating a space for everyone to share and talk to each other. In this city, where everyone lives in a different neighborhood, sometimes several hours of commute in between us, we need a way to come together.

I am so proud of all of the artists that have performed in our shows. I wish I could give all of the shout outs that exist right now. Some of my talented friends are so successful I can’t even believe it. Some used The Hoover Dam Collective as a testing ground for a new set, a new art form, a vessel for going out on a limb. Now those same people are killing it out there in the world. I heard you and you on NPR, I saw you and you on TV, in that music video, you during that live show. But I can’t give shout outs now, not just because I might accidentally leave someone out or because there are just too many of you amazing people, but also because you all don’t need me to call out your successes. You’re all doing just fine on your own. Those of you who think you haven’t hit success yet, have you played a Hoover Dam show? Boom. That’s it. You’ve made it in my eyes. To all artists that have performed with the HDC –  know that I’m always paying attention and I’m thrilled with your triumphs, even if I’m all the way in Colorado.

Also, everyone should become super famous so that I can be a cool old lady that is like “Oh yes, I remember when I lived in New York, back when it wasn’t halfway underwater, and so and so performed a private concert for me and my friend at some crappy irish bar in the Village. Those were the days…” 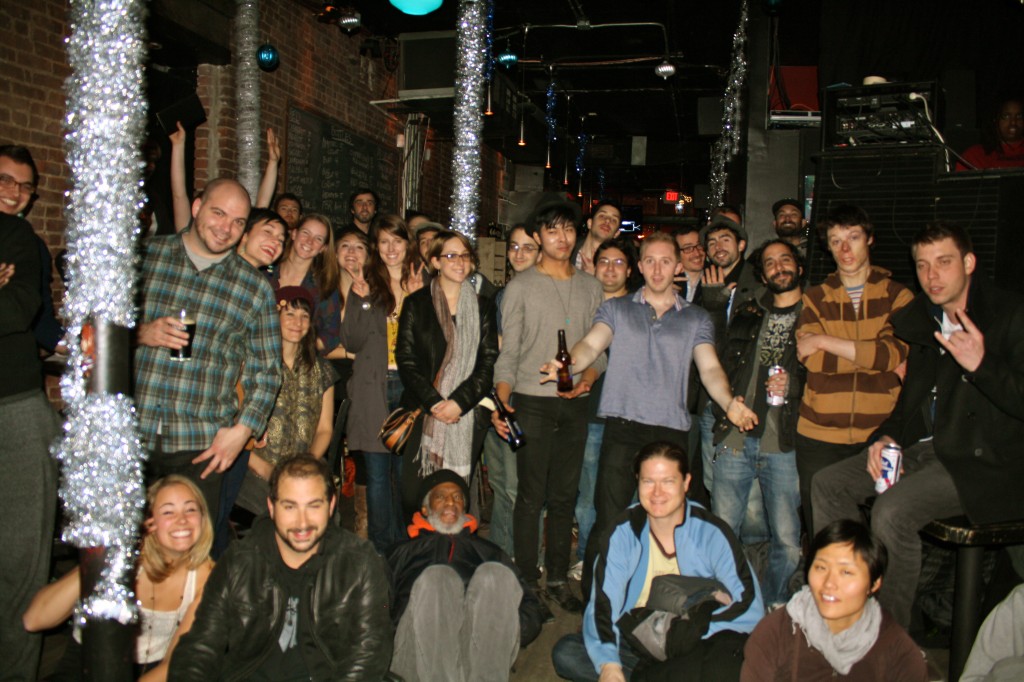 On Tuesday night I am bringing the abundance of joyous energy that this Three of Cups card portrays to the Hoover Dam Collective show at Muchmore’s. I want to say goodbye to all of you, but not by getting sappy and quoting stuffy female aviators. I’m going to be saying goodbye while smiling and dancing and holding up some boss looking chalice and toasting “To The Hoover Dam!” 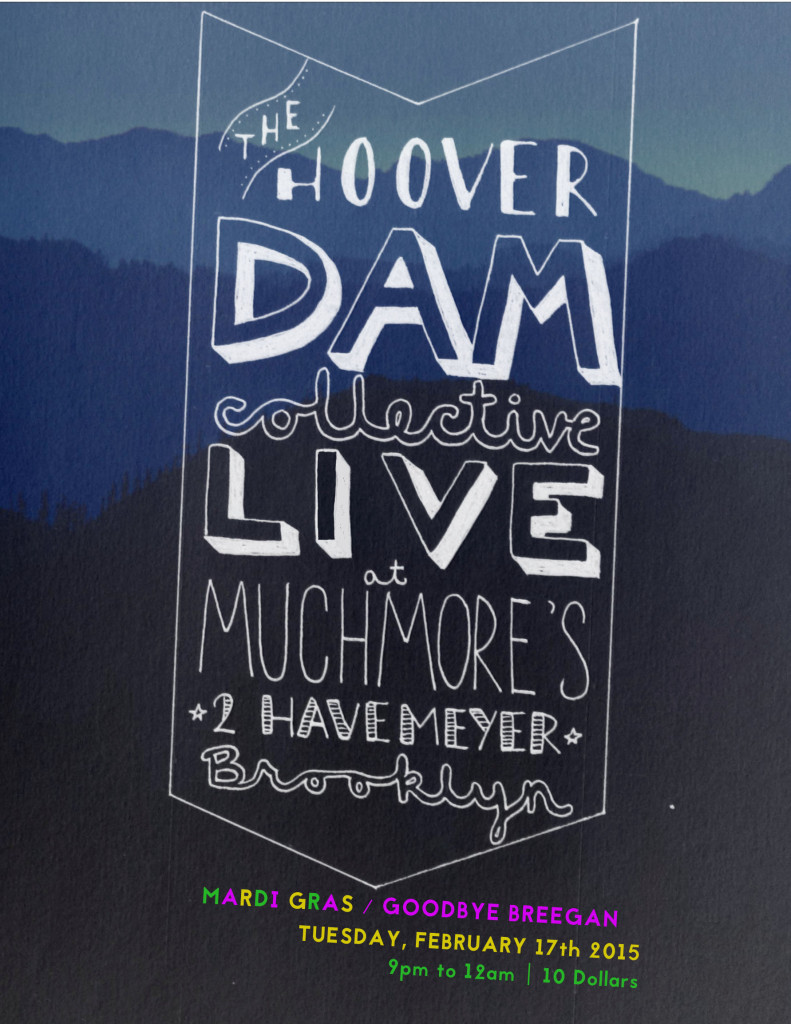 Ask yourself the important question – I may never see the lovely and incredible Breegan again. Is that worth 10 dollars to me? If so, see you there friend.

About BK in Bk

HDC's resident Photographer and Website-keeper. Occasionally contributes dance and choreography talent. Works in a restaurant to earn cheddar.
View all posts by BK in Bk →